The Sarasota County Democratic Party exceeded every expectation in President Obama’s victory in Florida this year, and we have emerged from the 2012 election stronger and more motivated than ever. So I was thrilled to be re-elected as Chair to lead the Party forward.

Our focus for the next two years couldn’t be clearer. We intend to defeat Governor Rick Scott. He has put Florida on the wrong track, and has shown us over and over that he has the wrong priorities and is out of touch with Florida’s values.
END_OF_DOCUMENT_TOKEN_TO_BE_REPLACED

With Sandra Fluke, reproductive rights activist, scheduled to be in the Sarasota area this Saturday, September 29 for a rally supporting Congressional candidate Keith Fitzgerald (more details here), I wanted to share more of my impressions of this remarkable young lady, both here and on Sarasota Patch. When I saw Sandra Fluke speak at the Democratic National Convention, I was so proud to be a Democrat! This young woman stood up for what she believes, and even after ridicule and hateful slurs from the far right, she stood up again and delivered her message loud and clear to the world.  Here is some of what she said about “two profoundly different futures” that await women:

“[In one America], you have a new vice president who co-sponsored a bill that would allow pregnant women to die preventable deaths in our emergency rooms. An America in which states humiliate women by forcing us to endure invasive ultrasounds we don’t want and our doctors say we don’t need. An America in which access to birth control is controlled by people who will never use it; in which politicians redefine rape so survivors are victimized all over again; in which someone decides which domestic violence victims deserve help, and which don’t. …it’s not the America we should be. It’s not who we are.

“We’ve also seen another future we could choose. First of all, we’d have the right to choose. It’s an America in which no one can charge us more than men for the exact same health insurance; in which no one can deny us affordable access to the cancer screenings that could save our lives; in which we decide when to start our families. An America in which our president, when he hears a young woman has been verbally attacked, thinks of his daughters—not his delegates or donors—and stands with all women.”

Among so many important issues, this election is about the right of women to decide their own futures, decide about their own bodies, and their right to health care when they need it. Watch the full video of her speech and you, too, will be moved – moved to choose the future “where we mean it when we talk about personal freedom, [not] one where that freedom doesn’t apply to our bodies and our voices.” 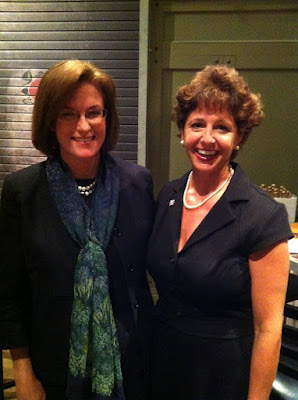 Ellen Moran, Chief of Staff at the US Department of Commerce under Secretary Gary Locke was in Sarasota on April 19th in support of U.S. Congressional candidate Keith Fitzgerald.  Ellen Moran previously held the position of White House Communications Director and prior to her post at the White House, she was executive director of EMILY’s List.

So why would the former EMILY’s List director come to fundraise for Keith Fitzgerald, with so many female progressive candidates to support? Because Fitzgerald has a significant chance to defeat incumbent Vern Buchanan, who is engulfed in legal investigations, including those being conducted by the Justice Department and the IRS.  With the House in play, Sarasota represents a chance for a Democratic pick-up from a GOP incumbent known for his fundraising abilities, and because of this, we can expect to see many more heavy hitters coming to fundraise in Sarasota.

Earlier this week I wrote a post for the Sarasota Patch blog about the ongoing ethics problems of Sarasota Congressman Vern Buchanan (problems that are also drawing national attention), and the responsibility voters need to take for electing politicians with integrity. Do you think that ethics issues will – or should – play a deciding role in this and other races across the country? Share your thoughts in the comments.

Happy (belated) Mother’s Day! This holiday and Father’s Day always remind me of the sacrifices my parents – immigrants from Italy – made in coming to America to build a life and a home here in the United States. Whether you also have parents or grandparents that came from other countries, or you have to look back a bit further, nearly all Americans can point to the immigrant experience somewhere in their family trees. We all come from families who came to America to make a better life for themselves, and through their hard work they made a stronger America.

As has happened in the past, however, a strong anti-immigration strain has made headway in our nation, and will be a factor in this coming election. Here in Sarasota, the local Republican Party has initiated several anti-immigrant petition drives – one that would make English the official language of the United States (making life more difficult for all immigrants, including those here legally), and another petition supporting passage of laws similar to the strident anti-immigrant law passed in Arizona in 2010, SB 1070, which encourages racial profiling and harassment of Hispanics and other minorities, regardless of their legal immigration status. At the national level, Mitt Romney has said that America should make it so miserable for undocumented immigrants that they will “deport themselves.” That sounds like support for the Arizona-style laws to me.

In a nation where greatness was built on a foundation of immigrant mothers, fathers, daughters and sons, these harsh and punitive proposals are neither appropriate nor beneficial for America. Instead, like President Obama, I believe that comprehensive immigration reform is needed to protect the interests of Americans while at the same time creating responsible optionsfor those who want to start a life in the United States. The DREAM Act – a bipartisan legislative proposal that would provide a path toward citizenship for young people eager to get an education, work hard, and make a contribution to America’s future – is a key part of his solution.

As President Obama said earlier this month, “we’regoing to keep fighting for this common-sense reform — not just because hundredsof thousands of talented young students depend on it, but because ultimately America depends on it.” Legislation like the DREAM Act allows our nation to continue our proud “melting pot” tradition, while improving our economy by harnessing the talents of young people who want to work hard and make our future brighter. The contrast between the two parties on this critical issue is clear, and as a daughter of immigrants, I hope that we will all remember what is needed to help American families succeed. 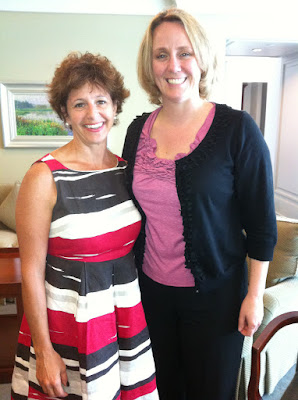 Women will be the deciding voters in 2012, and EMILY’s List President Stephanie Schirock believes that 2012 is also poised to be a historic year for women candidates.  As Republicans have all but declared a “War on Women,” Stephanie and her competent team of professionals are recruiting strong candidates and raising money to support those candidates, because, of course, Early Money Is Like Yeast (it helps raise the dough). With a record-breaking 15 women running for U.S. Senate (with 33 seats up for election in 2012), EMILY’s List has endorsed 11 of those female candidates.

Stephanie was in Sarasota for private meetings with donors and candidates.  She talked about how EMILY’s List helped to add three more pro-choice Democratic women to the House of Representatives through recent special elections, and how EMILY’s List plans to continue to increase those numbers in the Senate and the House, come this November.

We all know Jerry Springer as the host of the tawdry daytime talk show, and some of us remember him from as a finalist on Dancing with the Stars, but many do know not him as a progressive political activist and elected official. 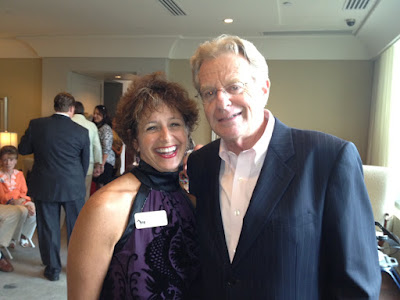 Jerry majored in political science at Tulane and received a law degree from Northwestern. Not long after graduating law school, Jerry met Robert Kennedy at a dinner party and signed on to work on his presidential campaign. After Kennedy’s assassination, Jerry led the movement in Ohio to lower the voting age from 21 to 18, which resulted in resulted in his Senate Judiciary Committee testimony supporting ratification of the 26th Amendment to the Constitution. Springer served five terms on Cincinnati City Council and became mayor at age 33.

We were delighted when Jerry Springer hosted a special evening of Wine, Cheese & Politics as a fundraiser for the Sarasota Democratic Club. Jerry spoke eloquently on our need to be vigilant in support of our middle class, Medicare, Social Security, and cornerstone values of the Democratic Party: “There is a reason we are all Democrats. We believe in America everyone deserves a shot at the American dream….not just the wealthy.”

We are planning a few more Jerry Springer events before November. So plan on coming down to Sarasota for our next event with Jerry!

ritaferrandino
Create a free website or blog at WordPress.com.